Join our text updates to be entered to win. 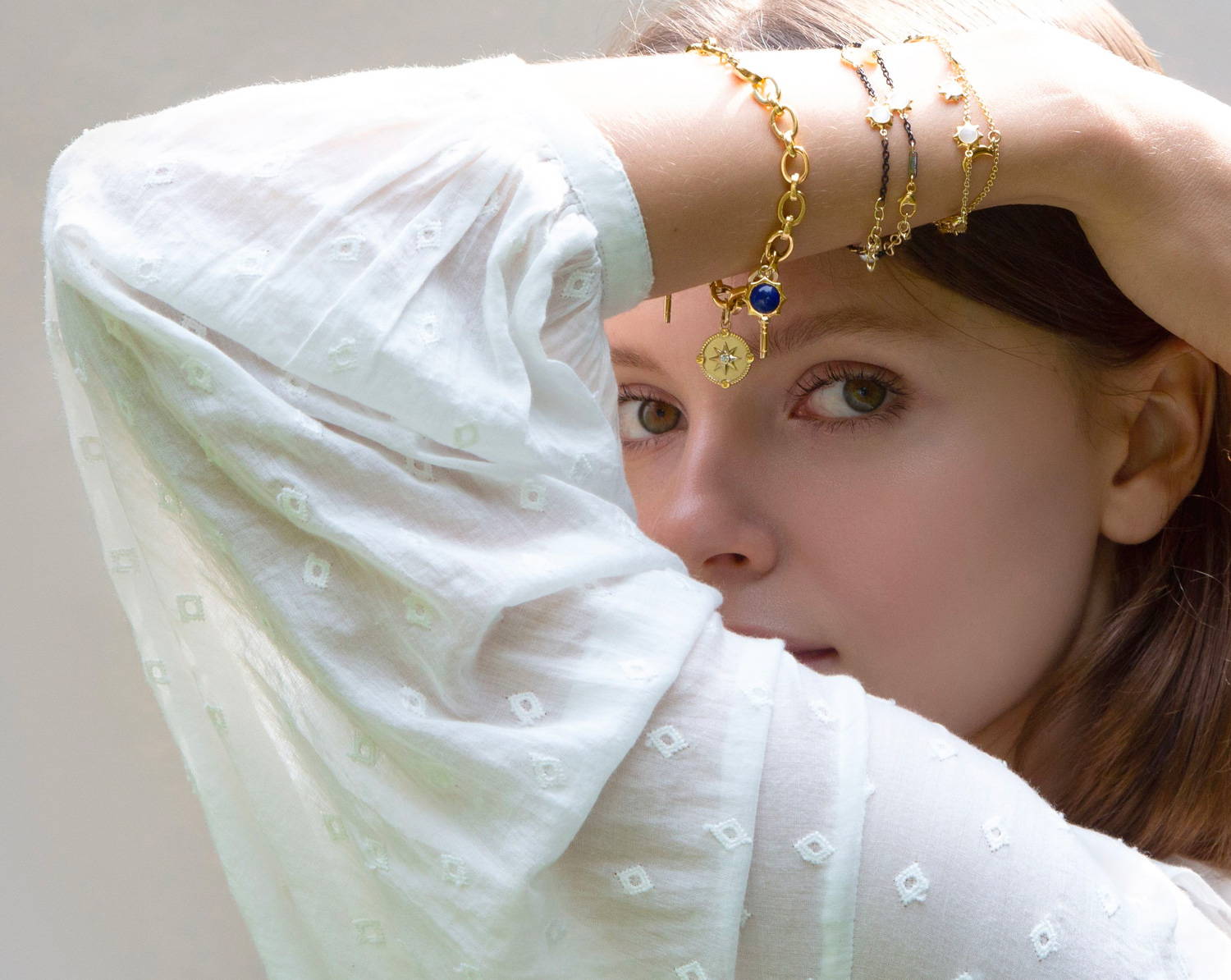 SPONSOR: Monica Rich Kosann (sponsor) P.O. Box 797, Norwalk, CT 06852.
NO PURCHASE NECESSARY TO ENTER OR WIN. MAKING A PURCHASE DOES NOT INCREASE YOUR CHANCES OF WINNING. ODDS OF WINNING WILL DEPEND ON THE TOTAL NUMBER OF ENTRIES RECEIVED. VOID WHERE PROHIBITED BY LAW OR WHERE BONDING, REGISTRATION, OR OTHER REQUIREMENTS EXIST BUT HAVE NOT BEEN MET. BY ENTERING THIS SWEEPSTAKES, YOU AGREE TO THESE TERMS AND CONDITIONS, WHICH ARE A CONTRACT—READ THEM CAREFULLY BEFORE ENTERING. WITHOUT LIMITATION, THIS CONTRACT INCLUDES A RELEASE FROM YOU, AND A LIMITATION OF CERTAIN OF YOUR RIGHTS AND REMEDIES.

TIMING: Text Sign up CHANCE TO WIN $500 GIFT CARD entrants will be accepted during the dates of 5/25/21 through 5/31/21 11:59PM ET and any entries submitted after this date will not be considered or entered into the contest. No purchase necessary to enter or win.

HOW TO ENTER: To enter to win the Text Sign up Chance to Win $500 Gift Card, entrants must: Sign up for the Monica Rich Kosann Text updates.

ELIGIBILITY : The Monica Rich Kosann Text Sign up Chance to Win $500 Gift Card is open only to legal residents of the fifty (50) United States who are at least eighteen (18) years old at the time of entry. Subject to all applicable federal, state, and local laws and regulations. Void where prohibited. Participation constitutes entrant’s full and unconditional agreement to these Official Rules and Sponsor’s and Administrator’s decisions, which are final and binding in all matters related to the Sweepstakes. Winning the prize is contingent upon fulfilling all requirements set forth herein.

SELECTION AND NOTIFICATION OF WINNERS:
Sponsor will select one winner who will be selected at random. Odds of winning a prize depend on the number of eligible entries received. The decisions of Sponsor are final on all matters relating to this Contest. By 6/4/21 Monica Rich Kosann will choose 1 winner who will receive a $500 Gift Card to use towards a future purchase on www.monicarichkosann.com (retail value $500).
The winner will be notified via sms text by phone number 8332269484 by the Sponsor.
Prize is non-transferable and no substitution will be made except as provided herein at the Sponsor’s sole discretion. Sponsor reserves the right to substitute the prize for one of equal or greater value if the designated prize should become unavailable for any reason. Winner is responsible for all taxes and fees associated with prize receipt and/or use.

GENERAL CONDITIONS: By entering the Text Sign up Chance to Win, entrant agrees to allow Sponsor to contact him/her via text subsequent to the drawing regarding Monica Rich Kosann news. By receipt of any prize, winner agrees to release and hold harmless Sponsor, its respective subsidiaries, affiliates, suppliers, distributors, advertising/promotion agencies, and prize suppliers, and each of their respective parent companies and each such company’s officers, directors, employees and agents (collectively, the “Released Parties”) from and against any claim or cause of action, including, but not limited to, personal injury, death, or damage to or loss of property, arising out of participation in the Text Sign up Chance to Win or receipt or use or misuse of any prize. Sponsor reserves the right to cancel, suspend and/or modify the Text Sign up Chance to Win, or any part of it, if any fraud, technical failures or any other factor beyond Sponsor’s reasonable control impairs the integrity or proper functioning of the Text Sign up Chance to Win, as determined by Sponsor in its sole discretion, without prior notice. Sponsor reserves the right, in its sole discretion, to disqualify any individual it finds to be tampering with the entry process or the operation of the Sweepstakes or to be acting in violation of these Official Rules or any other promotion or in an unsportsmanlike or disruptive manner. Any attempt by any person to deliberately undermine the legitimate operation of the Text Sign up Chance to Win may be a violation of criminal and civil law, and, should such an attempt be made, Sponsor reserves the right to seek damages from any such person to the fullest extent permitted by law. Sponsor’s failure to enforce any term of these Official Rules shall not constitute a waiver of that provision.

LIMITATIONS OF LIABILITY: The Released Parties are not responsible for: (1) any incorrect or inaccurate information, whether caused by entrants, printing errors or by any of the equipment or programming associated with or utilized in the Text Sign up Chance to Win; (2) technical failures of any kind, including, but not limited to malfunctions, interruptions, or disconnections in phone lines or network hardware or software; (3) unauthorized human intervention in any part of the entry process or the Sweepstakes; (4) technical or human error which may occur in the administration of the Text Sign up Chance to Win or the processing of entries; (5) late, lost, undeliverable, damaged or stolen mail; or (6) any injury or damage to persons or property which may be caused, directly or indirectly, in whole or in part, from entrant’s participation in the Sweepstakes or receipt or use or misuse of any prize. If for any reason an entrant's entry is confirmed to have been erroneously deleted, lost, or otherwise destroyed or corrupted, entrant’s sole remedy is another entry in the Text Sign up Chance to Win, provided that, if it is not possible to award another entry due to discontinuance of the Sweepstakes, or any part of it, for any reason, Sponsor, in its sole discretion, may elect to hold a random drawing from among all eligible entries received up to the date of discontinuance for any or all of the prizes offered herein. No more than the stated number of prizes will be awarded. Sponsor is not responsible for typographical or other errors in the offer or administration of this contest, including but not limited to errors in advertising, the Official Rules, the selection and announcement of winners, or the distribution of any prize. Sponsor is not liable for lost, late, stolen or misdirected entries. All entries become the property of Sponsor and will not be acknowledged or returned. Sponsor and each of its officers, directors, affiliates, related entities, partners, partnerships, principals, representatives, agents, licensees, sponsors, successors and assigns: (1) make no warranty, guaranty or representation of any kind concerning any prize; (2) disclaim any implied warranty; and (3) are not liable for injury, loss, or damage of any kind resulting from the acceptance or use of any prize, travel related thereto or from participation in this contest. By entering this contest, participant agrees to be bound by these Official Rules and all decisions of the judging organization. If any activity relating to any prize is canceled or postponed for any reason, the balance of that prize will be awarded in full satisfaction of prize award. Caution: any attempt to deliberately damage or undermine the legitimate operation of the Contest may be in violation of criminal and civil laws and will result in disqualification from participation in the Contest. Should such an attempt be made, sponsor reserves the right to seek remedies and damages (including attorney fees) to the fullest extent of the law, including criminal prosecution.