Hip To Be Square: The History of Emerald Cuts

Emerald cut diamonds can be described as elegant, sophisticated, classic and graceful. The way in which they are cut imbues them with a more subtle, streamlined and look, much less sparkle than round brilliant cuts or any of the other shapes that appeared in the 20th-century. It’s no wonder that world famous celebrities from this time period through today own these cuts of diamond as their engagement rings. Many believe that emerald cuts diamonds were born in the 1920s, which is partially true--the technology and techniques for cutting them precisely was refined in that period and the geometric clean lines were perfect for the modernity of Art Deco designs. However, the emerald cut diamond origins date back to the 1500s named after—you  guessed it—emeralds. Emeralds are a soft stone and also tend to have more internal inclusions. The stone cutters of the day used this shape for this otherwise magical green stone as it reduced any chipping or cracking during the cutting process and then during setting the stone.

But come the 1920s and the emerald cut was one of the shapes that depicted Hollywood glamour  and the lines of architecture and decorative arts that was in full swing.

Bold Personality:  The Unique Traits and What To Look For In The Emerald Cut

Emerald shaped diamonds are step cut which  means the facets get smaller from top to bottom which is the opposite of the way modern brilliants are shaped. The emerald cut feature a large expanse on the table (top) of the stone which allows them to appear larger than they are. However as good as that sounds, it’s important to focus of three of the 4Cs due to the almost mirror like effect of these shapes. It makes sense that cut, color and clarity are more important that the carat weight of the stone. It is better to purchase a smaller stone of higher color and clarity when you are looking into purchasing an emerald cut diamond engagement ring. It will appear bigger yet it’s picture like window won’t show off flaws when you go for a more colorless and a stone and that are VVS in clarity. 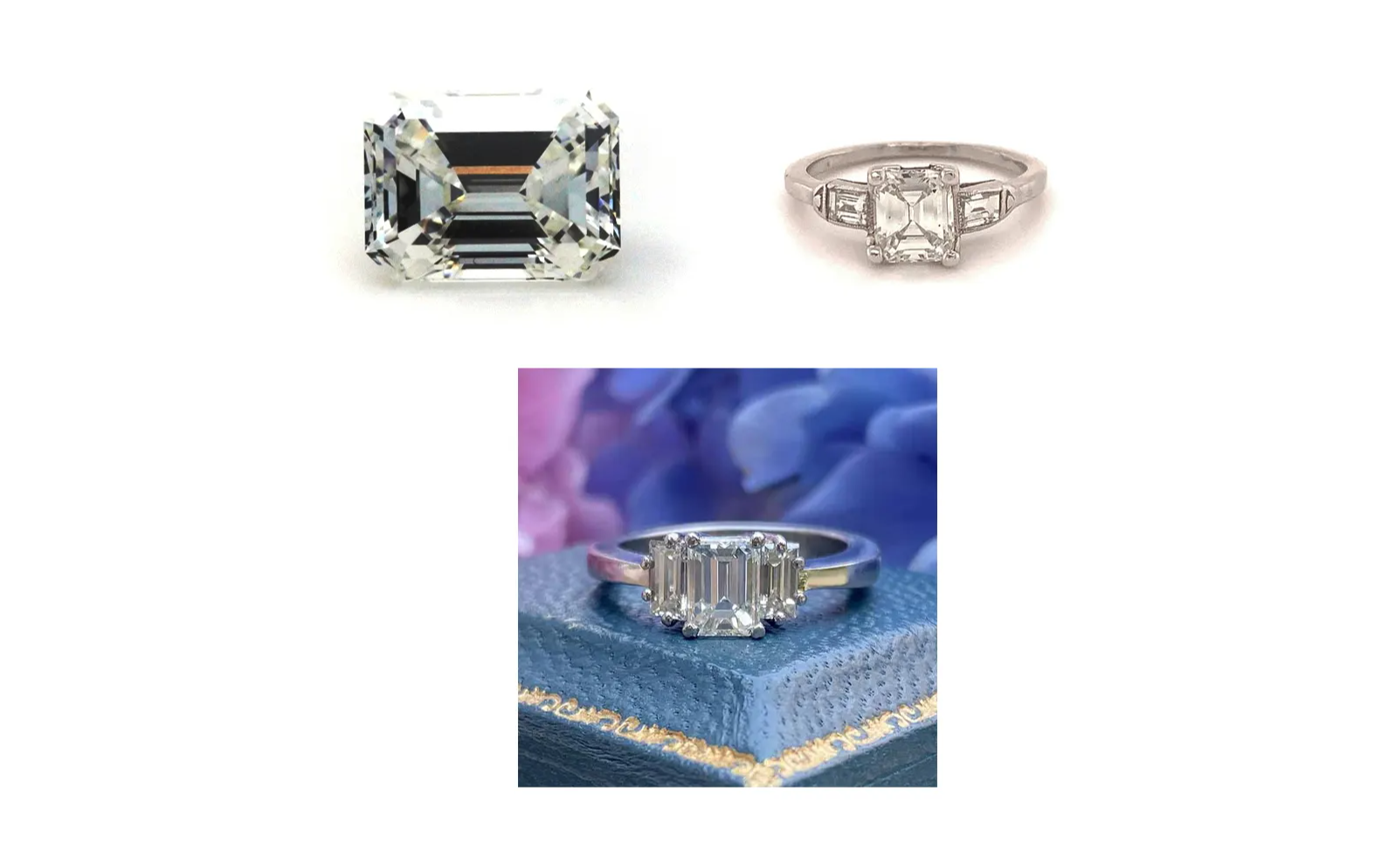 Setting The Styles: The Jewels in which Emerald Cuts Look Best

Emerald shaped diamonds appeared in 1920s rings which eventually become used as unique engagement rings. Whether they are set as a solitaire, or with a hallo of round or baguette diamonds, have tapered baguettes on the side –they are utterly timeless and sophisticated in their design aspects

The Art Deco period also featured them in smaller sizes in repetitive patterns in diamond bracelets arranged with other stones. In the mid-twentieth century through today, there have been different incarnations of the diamond necklace with it all around east to west set emerald cuts as modern versions of riviere or eternity necklaces. They are also the lower voltage bling alternative to stud and drop earrings unless they are glitzed up with a halo of brilliant round cut diamonds.

From Real To Reel: The Celebrity Princess Who Wore Her Emerald Cut Engagement Ring in Film:

Not all of Hollywood royalty received ‘rocks’—at least not the first time around. In the mid-1950s, when Hollywood’s fairytale princess, Grace Kelly, found her prince, Rainier III, she became Her Serene Highness Princess Grace of Monaco. The couple first met in 1955 after each had agreed to be interviewed by a Paris Match photographer at the Palace of Monaco. A quick visit lasted for hours. He showed her different rooms and his private zoo. After meeting the prince, Kelly broke off her engagement to French actor Jean-Pierre Aumont. Rainier visited her at her home in Philadelphia that Christmas, and a few days after he was introduced to her family in 1956, their engagement was announced. Prince Rainier originally proposed with a ruby and diamond eternity band—the colors of Monaco—but when he noticed that the American tradition lent itself towards bigger, flashier rings, he took no time in upgrading and commissioned a Cartier 10.47-carat emerald-cut diamond. Kelly also wore the ring in the film High Society (the musical version of The Philadelphia Story). The ring turned out to be a perfect fit for the part of a newly engaged socialite and appears often in the film, on Kelly’s finger and alongside Bing Crosby and co-stars Frank Sinatra and Celeste Holm. There were even a few lines written into the script about it. “That’s quite a rock Sam,” says ‘C. K. Dexter Haven’ (played by Bing Crosby), to his ex-wife and socialite ‘Tracy Samantha Lord’ (Grace Kelly) in the film. He then turns to her fiancé, George Kittredge’ and asks: “Did you mine it yourself George?” Adding a little inside humor into those who worked on the film and knew it was the soon to be Princess of Monaco’s own engagement ring. It also started a trend for emerald-cut engagement rings with woman who saw the movie.

Another iconic star of the day whose jewels are not only jaw dropping but tell so much of the story of her life, Elizabeth Taylor received a huge, yes huge emerald cut diamond engagement ring from one of the two great loves in her life, Mike Todd. When the film producer proposed to 24-year-old Taylor with an emerald-cut diamond ring, Todd joked it was not 30-carats but 29 and a half carats. The actress fondly called it her “ice skating rink”. Since she was still married to Michael Wilding at the time, Taylor would tell the press that it was not an engagement ring, but a friendship ring. Todd confirmed otherwise, and the couple wed in a ceremony in Mexico in February 1957 – just weeks after her divorce was finalized. The third marriage for both Todd and Taylor lasted just over a year, as Todd was tragically killed in a plane accident in March 1958, when the couple’s daughter, Liza, was just seven-months-old. Years after Todd’s death, Taylor continued to wear the ring, along with the many sentimental and spectacular jewels Todd bestowed on her during their marriage.

Fast Forward to modern superstars of music and film who were proposed to with emerald cut rings as they continue to be desirable and entice as one of the favorite cuts to own.

Sarah Jessica Parker wears a five-carat emerald cut on a simple yellow band and Amal Clooney’s ring from George is seven-carats. When Beyoncé sang Single Ladies (Put a Ring on It), Jay-Z got the message and did not choose just any ring for his superstar girlfriend. He proposed with appropriately flawless 18-carat emerald-cut engagement ring by Lorraine Schwartz, valued at approximately $5 million. The two married in secret in April 2008, and Beyoncé then publicly displayed her engagement ring for the first time on the red carpet for the ‘Fashion Rocks’ concert in New York City the following year.

Although certain celebrity marriages broke up, it is worth it to mention the emerald diamond engagement rings in this article. Take Mariah Carey. She received a 17-carat emerald cut diamond ring surrounded by pink diamonds from Nick Cannon and when they divorced, she traded it for a 35-carat emerald cut diamond from James Packer and then sold that when the relationship ended.

It is safe to say that emerald cut diamonds and emerald engagement rings have been in and out of popularity since the 1920s; however, they have never been out of style. There is a subtle difference between the fashionable in jewelry during different time periods and what is timeless and always a classic. Grace Kelly proved that—she was the embodiment of enduring beauty and her emerald cut diamond was a style worth imitating still to this day.