Get Squared Away: The History of The Original Asscher Cut

There are many cuts of antique diamonds that date back for centuries, however only two that I know of were named after the men that cut them. As we examine the history of diamond cuts, we’ll focus on one of these famous men, the famed Dutch diamond cutter Joseph Asscher, who was responsible for the first Asscher cut diamond in 1902. He was also the founder of I J Asscher Diamond Company. At the time of the cutting of this revolutionary diamond, it was also the first time in history that a diamond cut was patented. Until World War II, the patent protected Joseph’s cut from being replicated by other diamond houses. However due to Jewish persecution, the Asscher family had their business and store of diamonds seized during World War II and the patent was never renewed. (For diamond trivia, the other famed diamond cut named after its inventor is the Peruzzi diamond which was created in the 1600s by Venetian polisher Vincent Peruzzi who cut the diamond from 17 crown facets to 33. It was cushion shaped and offered more sparkle that what had come before.)

But back to earlier history of the revered house. Founded in 1854 in Amsterdam, the Asscher’s were trailblazers when it came to diamonds and were responsible for cutting some of the world’s most legendary as well as the largest diamond. The most well-known of which was the Cullinan with a weight of 3,106 carats. It was presented to England’s King Edward VII for his 66th birthday. In 1908 Joseph, was commissioned to cut the Cullinan, the largest gem-quality diamond ever unearthed in a De Beers-owned South African mine. It was eventually cut into nine, large, gem-quality stones and 96 smaller stones, which became part of the crowned jewels. The largest stone, at 530.20ct, is known as Cullinan I, or the Great Star of Africa and is a pear shape and is set into the head of the Scepter with the Cross. We wrote about this famous piece in the pear-shaped diamond blog, it is part of the crowed jewels as are all the Cullinan diamonds. The 317.4ct Cullinan II, or the Second Star of Africa, is a cushion-cut diamond mounted in the front of the circlet of the Imperial State Crown (again covered in our blog article on cushion cut stones).

Cutting Edge: The Traits of The Original Asscher Cut Diamond

When you first see an Asscher cut diamond, you may mistake it for an emerald cut due to its step cut facets which show any inclusion or imperfection inside the stone. However, Asscher cuts are more square with clipped corners and if you look straight into the stone you will see an X shape. If you look at the Asscher cut diamond from the side, it has a noticeably higher crown than other diamond shapes. The original had 58 facets which were larger and wider than other diamonds, creating an octagonal shape and with the same number of facets as the brilliant cut, it sometimes gave off the effect of looking into a house of mirrors or featured wide windmill-type reflections, deep pavilions and smaller tables. Traditionally when looking at the antique Asscher cuts engagement rings, a couple might decide on a larger stone as Asscher’s give off a smaller appearance that their carat weight. The clarity of an Asscher cut diamond is what deems it more unique. Although it has 58 facets, the step cut creates a more subtle sparkle that a round brilliant diamond for an engagement ring. Therefore, when someone is purchasing an Asscher cut diamond, it’s best to go with VS2 and a higher quality whiter stone, no less that a G-color.


In Step With The Times: The Asscher Cut Ring And The Art Deco Period

By the time the Art Deco period rolled around, the Asscher cut ring was the diamond that met with all of the characteristics of the designs of the time. It was sleek, chic, spoke to the modernity and elegant streamlined geometric designs in everything from jewelry to all forms of art, architecture and even travel. Cartier and other renowned European houses began showing the Asscher cut rings to their celebrity and royal clients.

In 1980, the Asscher Diamond Company became the Royal Asscher Company when Queen Juliana of the Netherlands gave it a royal title in recognition of its contribution to groundbreaking diamonds and the diamond industry.

In 2001, almost 100 years after the original Asscher diamond cut was conceived by Joseph, his great-grandchildren Edward and Joop Asscher introduced an enhanced version, known as the Royal Asscher cut. Like most antique diamonds which were improved in cut with new technology and cutting techniques, they developed the Royal Asscher Cut, which features a high crown and 74 facets which are measured for complete symmetry. The Royal Asscher cut is patented to prevent other diamond companies from replicating the design. 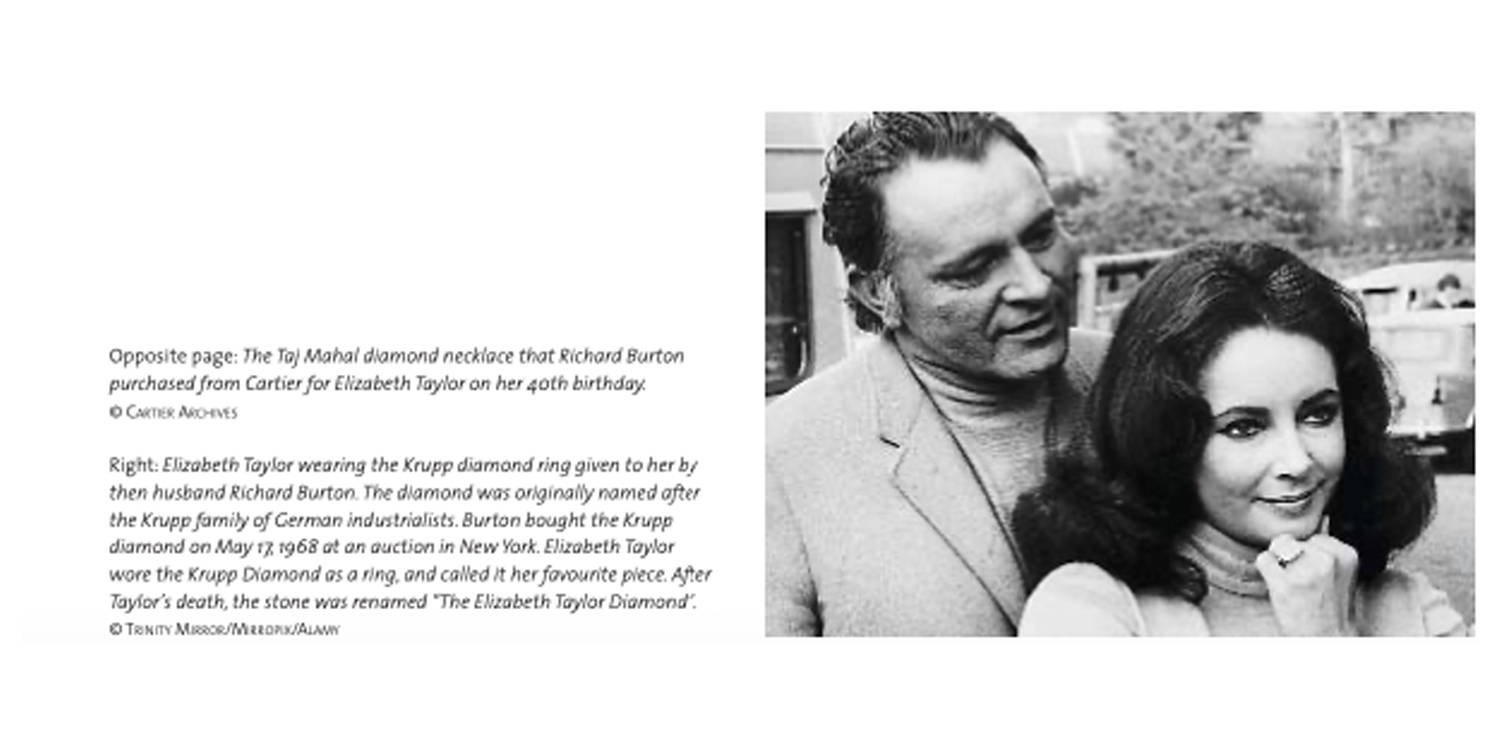 Elizabeth Taylor wearing the Krupp Diamond shown with Richard Burton from If These Jewels Could Talk (Beth Bernstein, ACC Artbooks 2015)

Asscher cut engagement rings have graced the fingers and heads of celebrities and royalty alike. In 2011 Royal Asscher Diamonds presented a bridal tiara to Kate Middleton in celebration of the Royal Wedding. The vintage-inspired tiara was set with 36 Royal Asscher-cut diamonds, along with pear and round-shaped diamonds and was created by Toronto-based jewelry designer Reena Ahluwalia.

The antique and Royal Asscher cuts have become forerunners in engagement rings for a new generation of women who prefer a modern essence and symmetry in the jewelry they will wear every day.